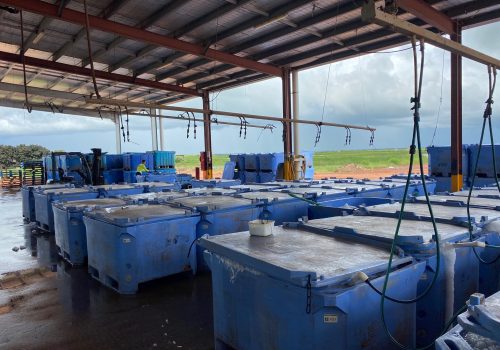 NAIF has been working with the Northern Territory’s Humpty Doo Barramundi since 2018, initially funding pond and nursery facilities which were completed last year.

An additional $24.2 million loan is being provided by NAIF to help the family business construct a commercial hatchery, ponds and improve existing facilities such as the nursery, packing shed, roads, electrical and rooftop solar. The project is forecast to create 111 construction jobs and 160 ongoing jobs from increased barramundi farming operations.

Humpty Doo Barramundi was an early pioneer of Australian Barramundi farming. The NAIF loan has helped the family to expand the farm, increasing the supply of quality, Australian-grown Barramundi while creating jobs in regional areas.

NAIF CEO Chris Wade said “Humpty Doo Barramundi was NAIF’s first Northern Territory Investment Decision. We are delighted that this additional support has reached contractual close and we are pleased to work with what is fast becoming a real Australian success story.”

Humpty Doo Barramundi CEO Dan Richards said: “We appreciate NAIF’s support in enabling us to grow, backing Australian family business and we are looking forward to working with them over the next few years to develop Australian aquaculture.”

“We are working here in the remote wilds of the Northern Territory to make Australia more self sufficient and secure in its Australian grown Barramundi supply”.

NAIF’s mandate was recently extended by the Minister for Resources, Water and Northern Australia until 2026 and the Minister also announced a series of reforms that following the passing of legislation will further assist in accelerating NAIF’s ability to drive economic growth in northern Australia.