Export hub a boost for Darwin

A new export hub at Darwin International Airport, built by Airport Development Group and supported by a $150 million loan from the Northern Australia Infrastructure Facility (NAIF), ‘keep the lights on’ during the pandemic and has unlocked new opportunities. 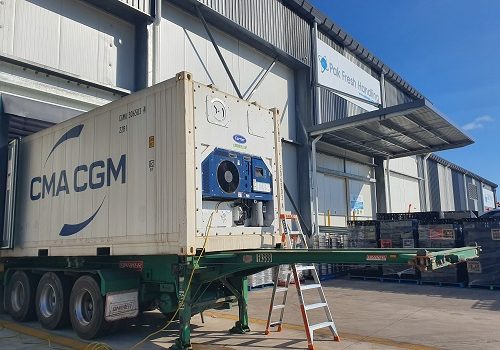 A new export hub at Darwin International Airport, built by Airport Development Group and supported by a $150 million loan from the Northern Australia Infrastructure Facility (NAIF), ‘keep the lights on’ during the pandemic and has unlocked new opportunities.

Exports of mangoes and pumpkins to international markets are set to increase five-fold in the Northern Territory as the cold storage and freight hub builds momentum in Darwin.

The export hub has also helped ‘keep the lights on’ for Airport Development Group during the COVID-19 pandemic, forged new air transport routes for Darwin and expanded export opportunities for the local seafood and agricultural industry.

The state-of-the-art Darwin Export Hub was used to transport 200 tonnes of mangoes and 200 tonnes of pumpkins in its first year of operation in 2021 and plans are in place to increase this capacity five fold in the 2022 season.

The 6250 square metre export hub is located at Darwin International Airport and was built by  Airport Development Group as part of a $300 million expansion supported by a $150 million loan from the Northern Australia Infrastructure Facility (NAIF). 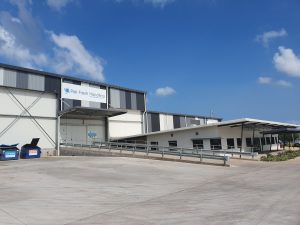 Pak Fresh Handling General Manager Robert Hall said he was delighted by their first year of operation of the export hub, which included 200 tonnes of mangoes exported to Dubai, Korea, Hong Kong and Singapore.

Other items exported included 200 tonnes of pumpkins as well as trial shipments of about five tonnes of seafood, including pearl meat, snapper, jewfish bladders and barramundi.

Along with 1000 tonnes each of mangoes and pumpkins, targets for the export hub’s 2022 season include exporting 500 tonnes of melons and 50 tonnes of seafood.

The export hub also came into its own in 2021 after Pak Fresh Handling was the only freight company able to import and distribute one million rapid antigen tests for COVID-19, using its temperature controlled storage facility so they could be distributed at the required temperature.

“It is a world class facility that enables us to do a large volume of perishable goods,” Robert says. “It is going to open up different markets, utilising infrastructure that hasn’t been available in Darwin before and we are also bringing the capability to the Territory from a perishable handling freight forwarding and accreditation point of view.”

“The facility provides a gateway for Territory farmers to send their produce to global markets,” Paul says. “The infrastructure opens up opportunities for industry to access new markets and reduce their reliance on traditional consumers.

“The NAIF investment into the cold storage facility has significantly reduced the costs and time involved in exporting Territory produce, it eliminates the need for farmers to send produce down south before it is exported internationally.

“The end result is that Territory produce is delivered to international consumers faster and in better condition than ever before. Territory farmers are already using the facility and many are shifting their focus to exports due to the opportunities that the facility opens up.”

Airport Development Group Executive General Manager Property and Terminal Ross Baynes says the cold storage and export hub was identified as a real need for local industry as nothing like it existed in the Territory.

Built in consultation with the NT Farmers, NT Seafood Council and mango industry, it needed to be a premier facility that was built to suit growing capacity over the next three to four years.

“We received a concessional loan from NAIF and found a tenant who took on a lease for the facility, Ross says. “Having the NAIF loan allowed us to build something for the future.

“We went bigger than what was needed at the time because it was a low interest loan that meant we could make it commercially viable and offer lower rents for the operator.”

Ross says the export hub has already been a success – tripling the volume of its product in its first year.

“It has been a real success, and has been operating at full capacity,” he says.

Building the cold storage and export hub using the NAIF loan has helped Airport Development Group diversify its revenue streams and support economic development for the Northern Territory during the COVID-19 pandemic.

“One thing we learnt through COVID-19, when the aviation business was decimated, was that we needed to diversify our revenue streams,” Ross says. “It was crucial to getting through this difficult period. The property portfolio kept the lights on for us during COVID.”

“The facility has played a key role in creating new aviation routes, with approximately 90% of our freight in the belly of passenger planes; if there are only 40 people on a plane, the freight makes it viable,” Ross says.

“This has helped create new dedicated freight services for the Territory, such as Tasman Cargo Airlines (DHL) to Singapore and Qantas to Hong Kong.  And Airport Development Groups is in discussion with other international carriers.’

Ross says the export hub helps Airport Development Group grow the Territory as well as create returns for their shareholders, of which one in three are Territorians.

“Growing the Territory and providing returns for our business is not just about passengers on planes, it’s about growing our population and supporting local industry, which means investing in projects like this,” he says.

“The NAIF concessional low interest loan over 15 to 20 years has given us the chance to plan for future growth. We appreciate the support of NAIF.”