Northern Australia Minister Madeleine King has affirmed the Albanese Government’s commitment to Northern Australia’s development and improved social outcomes for people in the north during her first visit to North Queensland as a minister. 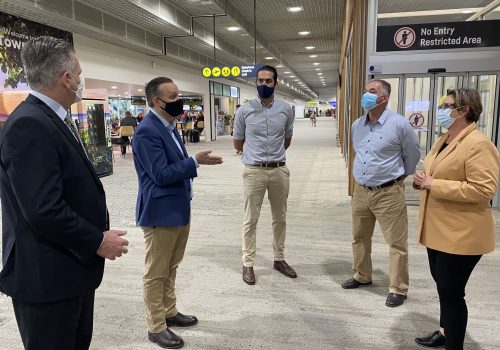 Northern Australia Minister Madeleine King has affirmed the Albanese Government’s commitment to Northern Australia’s development and improved social outcomes for people in the north during her first visit to North Queensland as a minister.

In her first visit to Townsville as Minister for Northern Australia, Minister King met with business and community leaders and visited major projects including those being delivered with support of the government’s $5 billion Northern Australia Infrastructure Facility (NAIF).

Among the projects is the major redevelopment of Townsville Airport, supported by a $50 million NAIF loan. The project is boosting the airport’s efficiency, access and amenities to ensure it is a modern gateway for tourism, students and exports to support and grow the regional economy.

“The Albanese Government is absolutely committed to development in Northern Australia and to increasing opportunities for people who live and work in this great part of Australia,” Minister King said.

“We are committed to working hard to support development, create jobs and economic security across Northern Australian communities.

“I was pleased to hear directly from community leaders on their collaborative and innovative approaches to sustainable development for economic and social parity across this diverse region.

“The north is home to more than 200,000 First Nations Australians. The Government has committed to implementing the Uluru Statement from the Heart, and I will ensure the Northern Australia portfolio plays a role in creating genuine and inclusive engagement through that process.

“Our Government’s commitment to the north is highlighted by the fact the full Cabinet met in Gladstone yesterday, reflecting the new government’s determination to ensure regional Australia remains at the heart of decisions being made for the good of all Australians.

“I am personally delighted to be appointed Minister for Northern Australia, and I will be a strong advocate for the north inside Cabinet and at the highest level of government.

“Australian Government investments in Northern Australia’s infrastructure will help keep pace with the growing needs of the community and industry.

“The redevelopment of Townsville Airport is a great project that will support many sectors of the north’s economy as the gateway to this vibrant region, including resources, tourism, agriculture and education.”

Background on Townsville projects supported by the Australian Government and the NAIF: