TIC of approval for NAIF loan to James Cook University 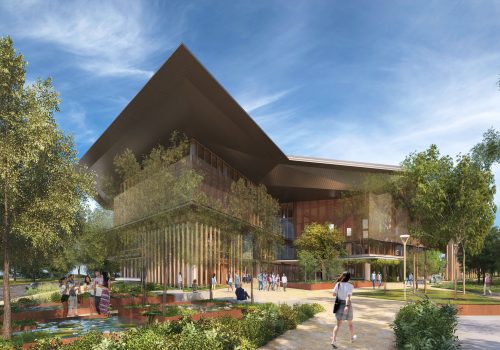 NAIF is supporting the project on JCU’s Bebegu Yumba (Townsville) campus with a loan of up to $96 million. The milestone means JCU can now draw on the funds as needed to support construction milestones.

Work on site is underway and the TIC is expected to open in Semester One, 2023.

The four-storey, 9,400m2 TIC will be the centrepiece of an innovation hub in which undergraduate and postgraduate engineering and IT students, industry partners and researchers will converge and collaborate.

It is expected the TIC project will create a forecast around 300 construction jobs and more than 500 other jobs, with at least 80% of subcontractors and suppliers locally sourced.

The complex is adjacent to the new Student Accommodation Facility, which is also being built and supported by NAIF through a separate loan of up to $46 million.

NAIF CEO Chris Wade: “NAIF has consolidated a strong relationship with JCU in recent years, through funding support for the university’s TIC and student accommodation. It is great to see the construction progress already achieved on site and we look forward to seeing the TIC draw on NAIF’s loan and rise from the ground in the coming months.”

In Townsville, NAIF has to date supported five projects, worth more than $230 million which together will create or support more than 1,300 jobs. Alongside the two JCU developments, other NAIF-backed projects are:

In the broader Townsville region NAIF is also supporting other projects such as:

Across northern Australia as a whole, NAIF has to date supported 25 projects with committed investment worth $2.9 billion, forecast to generate around $9.4 billion in economic benefit, and support around 9,000 jobs. In Queensland, NAIF has approved loans to ten projects worth $1 billion in investment.

Artist impressions of the TIC, including a fly through video of the building, can be found below (images sourced from Kirk Architects with i4 Architecture and Charles Wright Architects): https://www.dropbox.com/sh/y3kl03d4uz0bnuc/AAD3xGvBwi-kAnuqR3mDFtRYa?dl=0