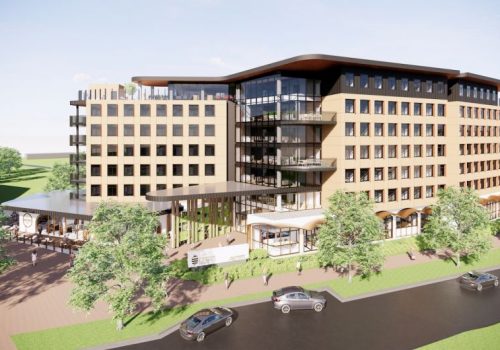 The Townsville office of Hutchinson Builders has secured the contract to build the seven-storey complex in the city and will commence the development in the coming weeks.

The new student accommodation complex is a crucial element of the renewal of JCU’s Townsville campus and is the first construction project in TropiQ, Townsville’s Tropical Intelligence & Health Precinct.

The project is forecast to create around 150 construction jobs, with an estimated 85 per cent of subcontractors and suppliers locally sourced. The building is due to open in first Semester 2022.

Welcoming the start of construction, NAIF CEO Chris Wade: “NAIF has been a long-term supporter of JCU’s exciting development plans and it is fantastic that work on the student accommodation is about to begin. The project is an example of NAIF working with partners to bring positive impact and help bring high-quality infrastructure to the region.”

NAIF’s support for new infrastructure in Townsville extends beyond the two James Cook University projects to also include the North Queensland Cowboys’ Community, Training and High-Performance Centre ($20 million loan) and $19.75m support for Mater Health Services’ redevelopment in the city.

Across northern Australia, NAIF has approved more than $2.2 billion in loans to infrastructure projects. Close to $1 billion of these funds are to Queensland projects.

NAIF’s mandate was recently extended by the Minister for the Resources, Water and northern Australia until 2026. The extension will allow NAIF to deliver more investment into the region and play a critical role in the Commonwealth Government’s broader agenda on economic development in the north.

NAIF sees itself as being a key partner in the development of northern Australia, whether through loans to new projects, working with existing financing partners or bringing together stakeholders to develop totally new initiatives.