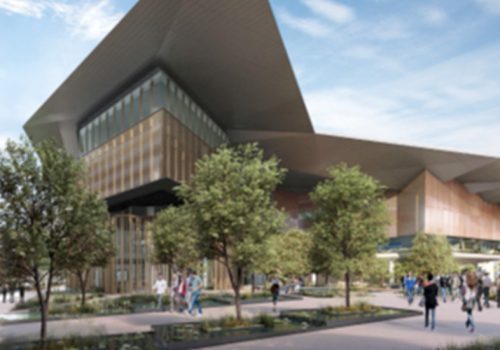 The Northern Australia Infrastructure Facility (NAIF) has made its first Investment Decision on a Queensland project, to offer a $96 million loan to James Cook University (JCU).

“The loan, being NAIF’s largest to date, will fund the development of the Technology Innovation Centre (TIC) on JCU’s Townsville Campus as part of a larger Enterprise Bundle which has a total project value of $174 million.”

Ms Walker said NAIF was delighted to be partnering with JCU.

“The University is a key contributor to the regional economy of northern Queensland employing more than 2000 full time equivalent staff and producing more than 2600 graduates in 2016,” she said.

“The TIC will be the centre-piece of the innovation hub, providing the space for undergraduate students, industry partners, post graduate researchers and start-up businesses to collaborate.”

A cost benefit analysis estimates that public benefits attributable to the Enterprise Bundle will be around $700 million over 30 years.

Ms Walker said JCU’s decision to proceed with the Enterprise Bundle would attract industry to the region and support growth in regional and international enrolments of engineering students.

“The TIC will provide contemporary facilities as part of the Science, Technology, Engineering and Maths (STEM) offering, targeting engineering students, as the University establishes a renewed focus on engineering for the tropics,” she said.

“The project will revitalise the JCU Townsville Campus with world class facilities, concentrating the footprint of the campus around a new Central Plaza in addition to the refurbishment and consolidation of existing buildings.”

Ms Walker said this Investment Decision was another example of the direct impact of the changes to the NAIF Investment Mandate announced in April by the Minister for Resources and Northern Australia.

“NAIF’s ability to fund the TIC demonstrates how the amendments to the Investment Mandate have facilitated the acceleration of infrastructure in northern Australia through the increased flexibility for NAIF to offer loan moneys for up to 100% of a project’s debt,” she said.

“Complementing JCU’s existing practices, the Indigenous Engagement Strategy, that forms part of the commercial arrangements, targets indigenous employment, procurement and engagement outcomes during both the construction and operating phases of the TIC.

“The Australian Industry Participation Authority has approved JCU’s plan to ensure that local and domestic businesses are provided with full opportunity to participate in the delivery of the TIC.

“The proposed financial assistance is subject to the finalisation of the Queensland Government’s consideration and agreement for the approved funds to be advanced.”

“There are a further 16 projects currently in the due diligence phase and we look forward to continuing to work with proponents and the northern jurisdictions to announce further Investment Decision in the near future.”