First NT project will take more Barramundi to the world 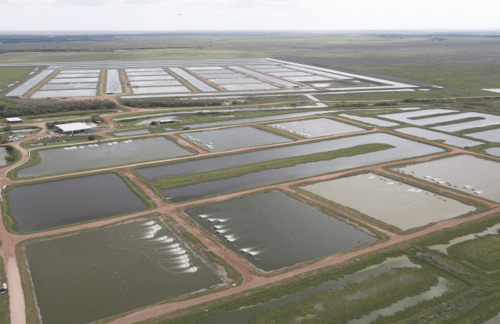 CEO Laurie Walker said the loan would finance the first of a three stage infrastructure investment, increasing from an initial $7.18 million commitment to a potential overall $30 million program.

“This loan will enable the HDB barramundi farm to expand and take advantage of increased global demand for high quality Australian seafood,” Ms Walker said. “It also has significant benefits for the community, that deliver on the NAIF mandate to grow the economy and population of northern Australia.

“NAIF quickly progressed the project to an Investment Decision, as a direct result of the Investment Mandate changes that were recently announced by the Minister for Resources and Northern Australia, the Hon. Matthew Canavan.

“The loan is for 100% of the debt for the project infrastructure components, which wasn’t possible under the previous Mandate. “It demonstrates the additional flexibility that the Mandate changes have given us, and how they’ve helped accelerate NAIF’s ability to make Investment Decisions.

“Announcing our first Investment Decision in the Northern Territory is also a significant milestone.”

Ms Walker said the first stage of the program being financed by NAIF included a solar farm, medium fish nursery and processing equipment.

“Stages two and three include potential off farm, multi-user processing facilities and further expansion of the nursery and farm,” she said. “NAIF wishes to maintain an ongoing connection with Humpty Doo Barramundi as it works towards its full program rollout.”

“The Indigenous community will also benefit from the Indigenous Engagement Strategy, that is mandatory for all projects that receive NAIF finance,” she said.

“HDB has key objectives including to increase recruitment and retention of Aboriginal employees.  The highly regarded HDB family business started in 1993 and has become the largest producer of farmed barramundi in Australia and the second largest producer on a single site globally.

“This loan will assist HDB in increasing production and moving to provide a greater range of value added products in an effort to make Australia more self-sufficient in its supply of Barramundi.”

Humpty Doo Barramundi’s Chief Executive Officer Nick Preston said: “Without the financial assistance of NAIF, infrastructure investment on our farm would not be possible in the short term.

“NAIF is providing us with the opportunity to fast track investment, enabling Northern Australia to be firmly recognised as the leading supplier of Premium Saltwater Barramundi.”

Dan Richards, owner and General Manager of Operations at HDB added: “We respect the time and effort NAIF has taken in learning about our operations and acknowledging that our business needs are aligned to the intent of NAIF.

“The investment will be of great benefit to the wider community, allowing us in time to open up opportunities to others in the region that want to venture into aquaculture. Overall the opportunity will ensure all Australians and the global marketplace, have access to Australian grown seafood every day.”

Managing Director and owner Bob Richards is pleased that “the NAIF loan will enable investment in solar power infrastructure that will assist in moving the farm to carbon neutral, which enhances our farm’s position as a leader in sustainable Australian aquaculture.”

Ms Walker said the project was also being financed in partnership with ANZ, showing NAIF’s ability to crowd in the private sector, to accelerate the benefits of infrastructure development in the north.