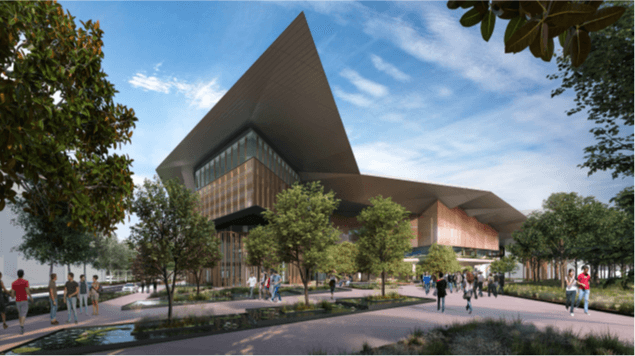 The construction of the James Cook University (JCU) Technology Innovation Complex (TIC) has reached a significant milestone with the signing of loan documents between the Queensland Government and JCU.

This is the first NAIF Queensland loan Facility Agreement to be entered into and follows NAIF’s Investment Decision in June 2018 to provide a loan of up to $98m towards the development in Townsville. The signing of the agreement signals the green light for JCU to now undertake detailed design work on the project.

NAIF has now committed $783m or 55% of its total loan commitments to projects in Queensland through Investment Decisions and conditional approvals. The most recent came earlier this month with a $610m loan commitment towards the Genex Power pumped storage hydro project.

The final agreed NAIF loan amount of $96m is part of a bundle of projects totalling $174m that will modernise James Cook University’s Townsville campus. It is estimated the full project will generate public benefit exceeding $700m over 30 years including the creation of around 270 construction and other jobs.

The five level, 10,000m2 TIC will be the centrepiece of an innovation hub in which undergraduate and post-graduate engineering and IT students, industry partners and researchers will converge and collaborate. Construction is expected to commence in mid-2020.

“NAIF’s early support for JCU provided JCU with the confidence to commit resources and undertake predevelopment activities to progress to today’s announcement.”

“From education facilities like the TIC, to the upgrade of the Townville airport, to the Kidston renewable energy project, NAIF is progressing growth and investment into Queensland. We look forward to building on our working relationship with the Queensland State Government to develop more projects in the region and congratulate the parties on today’s signing.”

NAIF has to date committed $1.4 billion in loans, through Investment Decisions and conditional approvals, to 13 infrastructure projects across northern Australia. This is comprised of:

Since May 2018 when changes were introduced to the NAIF Investment Mandate 2018, NAIF has made 12 loan commitments.

Across the eleven projects on which NAIF has made an Investment Decision forecasts are for: