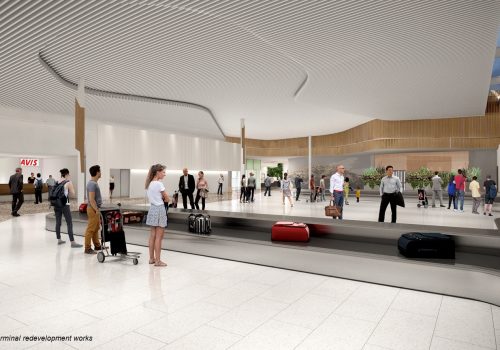 The Northern Australia Infrastructure Facility (NAIF) is pleased to advise that a $50 million loan to enable the upgrade of Townsville Airport terminal has reached financial close, with the initial drawdown expected to be funded prior to Christmas.

NAIF is providing the loan to Queensland Airports Limited (QAL) towards QAL’s terminal redevelopment and associated works. Specifically, the NAIF loan will fund:

Project Alive will expand and modernise the passenger terminal to meet regional growth needs. This includes doubling the capacity of the departure lounge, new boarding gates, expanded security areas and the installation of self-check in and bag-drop facilities, and an upgrade to core infrastructure.

With financial close now achieved, NAIF’s funds will now be drawn by QAL as the proponent’s construction timetable requires.

NAIF Acting CEO Amanda Copping said: “We are pleased that financial close has been reached meaning NAIF funds towards the Townville Airport upgrade can be drawn as required under the construction program. The airport upgrade is an important example of how NAIF is delivering for people and communities of Northern Australia.

“I thank the Queensland Government for its engagement in working with the NAIF team and QAL to achieve financial close.”

Queensland Airports Limited CEO Chris Mills said the company was delighted about the financial close, which would see work start on the redevelopment works before the end of the year.

“Roof works will be the first project to get underway and in the new year we will begin core infrastructure works,” he said.

“This redevelopment will address capacity issues and make the terminal more modern, welcoming and efficient.”

Independent analysis estimates that the Townsville Airport infrastructure will generate around $82 million in economic benefits for the region over the next 30 years through additional visitor spend and benefits to passengers.

All NAIF supported projects must have an Indigenous Engagement Strategy (IES) delivering participation, procurement and employment outcomes. Townsville Airport has committed to a 3% target for Indigenous procurement and employment associated with the redevelopment, regular engagement with Traditional Owners and a suite of other proactive strategies.

Queensland projects have now been allocated $848.5 million in NAIF loan financing through Investment Decisions, including the $50 million to Queensland Airports Limited.