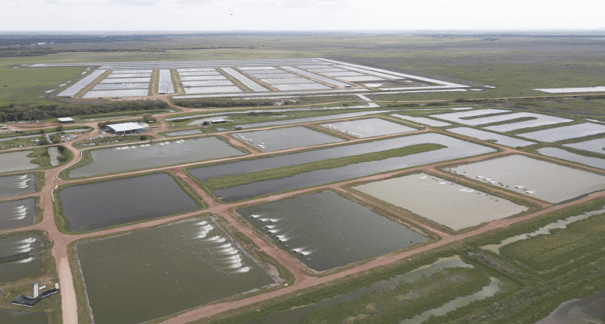 Excavators and bulldozers are on site building new ponds as part of the East Farm development project. New ponds are being built this year, with more to follow in 2020. A water treatment system is also being installed.

Humpty Doo Barramundi is a leading supplier of premium saltwater farmed barramundi and these new works will increase production at the farm by 30 per cent once finished.

NAIF last year provided a loan to Humpty Doo Barramundi of up to $7.18m to assist with the first stage expansion. There is potential for the NAIF investment to increase to up to $30 million, over the three stages of the full expansion.

The construction work was featured on ABC NT Country Hour on 4 September. You can hear the full piece at: https://www.abc.net.au/radio/programs/nt-country-hour/nt-country-hour/11458956.

NAIF’s investment is helping to grow the NT aquaculture industry through supply of fingerlings and future multi-user processing capacity. The full expansion of the Humpty Doo project is forecast to create up to 50 new jobs. Further information on this project and NAIF’s investment available here https://naif.gov.au/case-studies/humpty-doo-barramundi-farm-hdb-investment-decision/.