Humpty Doo Barramundi is embracing Indigenous culture on its farm located in northern Australia – from procurement, employment to cultural training for its staff. 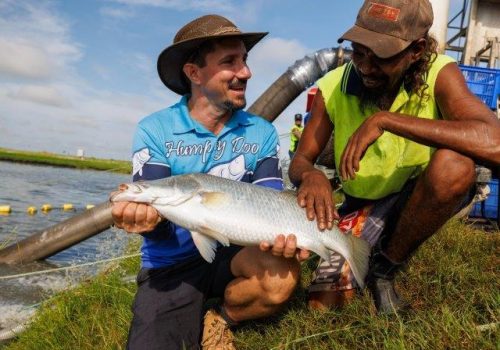 Humpty Doo Barramundi is embracing Indigenous culture on its farm located in northern Australia – from procurement, employment to cultural training for its staff.

Adelaide River in Australia’s Northern Territory is the spiritual home of the Barramundi, according to Dan Richards, Chief Executive Officer of Humpty Doo Barramundi.

Dan is part of a fifth generation family of Territorians that began as Australia’s smallest producers of Barramundi almost 30 years ago on a farm located on the banks of the Adelaide River – traditional lands of the Wulna – Limilngan people.

“Humpty Doo Barramundi is in our 29th year of operation, starting from very humble beginnings as the smallest producer of Barramundi in Australia to growing to the largest with national supply contracts with Woolworths, Qantas and Costco,” Dan says.

The family-owned company is halfway through an ambitious expansion plan that has been made possible through two loans provided by the Northern Australian Infrastructure Facility (NAIF) as part of its aim to develop and build economic capacity in the north.

NAIF provided a $7.18 million loan in the first stage of the expansion to build a fish nursery, production ponds and processing equipment, while a $24.2 million loan from NAIF is being used to advance NT Barramundi aquaculture production including build the first purpose-built commercial hatchery in the Northern Territory as part of Stage 2.

“We are about halfway through the expansion of the farm site so we still have a lot of work to do and a lot of opportunities for the future,” Dan says.

Part of their success has been working with the Traditional Owners of the area and embedding cross cultural training into the business through their Indigenous Engagement Strategy.

Humpty Doo Barramundi has been working with NT Indigenous Business Network to maximise the Indigenous outcomes for this project including increasing procurement opportunities for Indigenous businesses and employing and training Indigenous Territorians.

Indigenous-owned company M&J Builders recently completed the packing facility expansion at the farm that supports quality control processes to check and prepare the freshly harvested Barramundi for the Australian and international markets.

As part of the company’s Indigenous Engagement Strategy, all staff undergo cross cultural training and participate in a Pudakul Aboriginal Cultural Tour run by Lynette and Graham Kenyon, who are Traditional Owners of the area.

“The Pudakul owners are our Traditional Owners of this land so it is an important connection for us to have with them,” Dan says. “My children are fifth generation Territorians on both sides and we care about the Territory and about the people and the fabric of our community.

“A third of the population of the Territory is Aboriginal and we believe that it is important that Aboriginal people have the opportunity to participate in the benefits of the development of the Northern Territory for the good of everyone.”

Humpty Doo Barramundi Training and Development Officer Rachel Mara did the cross cultural training and Pudakul cultural tour when she started working with the company in September 2021.

Rachel describes the experience as a real insight into the local Aboriginal cultural of the area that gave her and other staff a new understanding and appreciation for the Aboriginal connection to the environment and different traditional laws.

“The Pudakul cultural tour helped us immerse into Aboriginal Indigenous culture and understand the environment and how important it is to value that culture because you are working on their traditional land,” Rachel says. “Our Indigenous employees are more comfortable with us understanding their culture and it really strengthens the team to work together.”

Dan says Humpty Doo Barramundi’s Indigenous Engagement Strategy is about providing employment and economic opportunities for Aboriginal people and businesses while showing respect to the Traditional Owners in the Northern Territory.

“The way we roll out our Indigenous Engagement Strategy at Humpty Doo Barramundi is at the outset of recruiting new people we put them through the cross cultural awareness and Pudakul cultural experience so they get a sense of where we are and what is important to us,” he says.

“When we are procuring for our projects, Indigenous content is one of the important criteria we use in assessing and choosing successful contractors to provide opportunities for Indigenous businesses.

“Given the Indigenous context of northern Australia it’s entirely appropriate that NAIF has provided criteria around including opportunities for Indigenous operated businesses and people so everyone canhave the opportunity to share in the benefits from the roll out of these investments across the north.”

Chair of the NAIF Board Tracey Hayes commends Humpty Doo Barramundi for the work they have done to embed their Indigenous Engagement Strategy as part of the NAIF loan criteria.

“We are really seeing the advantages of NAIF contribute to the development of the success story here at Humpty Doo Barramundi, it is really what NAIF was set up to do,” Tracey says.

Dan says the investment from NAIF has enabled the company to compete on an Australian and global stage.

“As a family business we were never able to borrow to build things, so it meant building infrastructure over a long period of time rather than being able to get a mortgage,” he says. “So the loan from NAIF has enabled us to plan ahead and build top class facilities that a business of our standard requires.”

Over time the investments in Humpty Doo Barramundi through the NAIF loan will double the capacity of their farm. The new infrastructure built through the NAIF loan has tripled the size of the company’s original packing facility to enable it to support the growing production of the farming operation.

“It will lead to significantly more Australian grown Barramundi in the Australian market,” Dan says. “At the moment 60% of Barramundi consumed in Australian is imported and we are working to make Australia more self-sufficient in its Barramundi supplies.”

All while providing opportunities for Indigenous Territorians to share in economic benefits of a thriving aquaculture industry in the NT. “Our mission is to responsibly produce beautiful Australian Barramundi while demonstrating our genuine care and commitment to our people, our environment and our partners so the work under our Indigenous Engagement Strategy is completely consistent with this mission and the values that underlie it.

“As the end of the Pudakul tour Graham Kenyon, our local Traditional Owner, cooks up our Barramundi in the ground oven and we share it together.

“Sharing this with our first nations people is wonderful.”