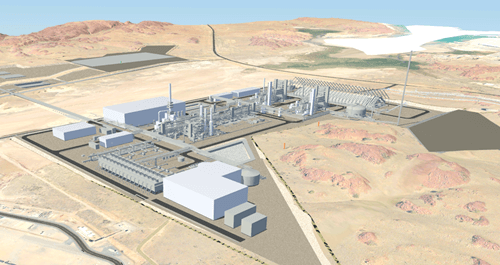 The Australian Government’s Northern Australia Infrastructure Facility (NAIF) has committed a $220 million loan to support the development of the Perdaman Urea Project in Western Australia. It will be the largest urea plant in Australia.

The US$4.2 billion project located 20 kilometres north-west of Karratha will produce approximately two million tonnes of urea per year and kickstart a new multi-billion-dollar fertiliser industry. It is expected that just under half the urea will be kept in Australia, with the balance shipped to the Asia-Pacific, Brazil and USA.

NAIF’s latest investment builds on two previous loans from the financier worth $255 million towards key infrastructure servicing the project.

NAIF last year committed $160 million to the Pilbara Ports Authority for a new multi-user wharf and facilities at the Port of Dampier and $95 million to the Western Australia Water Corporation for the expansion of the Burrup seawater supply and brine disposal scheme.

“This project will be transformational for Western Australia. Australia currently imports around 2.4 million tonnes a year of urea for agricultural use, and the Perdaman project will have the capacity to reduce imported volumes and secure local farmers’ access to fertiliser that is vital to ensuring food security,” Minister King said.

“The Perdaman plant is expected to provide an $8.5 billion public benefit, supporting a peak of more than 2,500 construction and operations jobs over its 40-year life.”

“The project is also a good example of how NAIF-funded projects can align with the Government’s Net Zero agenda. The project has been designed using the best available technology to minimise emissions, with reductions to be achieved in the short to medium term through efficiency gains and solar power imports. The project has committed to net zero by 2050, with an aim to achieve a 45 per cent reduction by 2030”.

The plant has been awarded Major Project Status by both the Australian and Western Australian governments.

Supporting economic growth in the north

NAIF CEO Craig Doyle said NAIF’s latest investment is another example of how the financier is supporting projects that bring economic growth to northern Australia.

“This project provides a strong strategic fit for NAIF and an opportunity to support the delivery of a transformational project which will support the diversification of the Pilbara economy.

“We are delighted to build on NAIF’s previous support for the project and playing a key role in the creation of a new industry, supporting significant domestic manufacturing and creating thousands of regional jobs.”

The NAIF loan will be provided via the WA Government. Funding will only be released when all required regulatory approvals and financing conditions have been met. NAIF will also continue to work with the proponents on delivery of their Indigenous Engagement Strategies to ensure positive Indigenous employment and cultural outcomes are achieved.