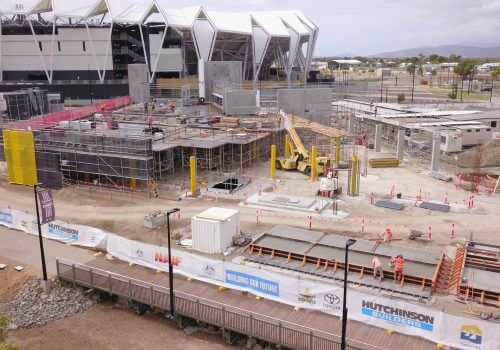 Funds from the Northern Australia Infrastructure Facility (NAIF) to a new community-focused training centre in Townsville are expected to start flowing next week as NAIF’s loan reaches financial close.

With the $20 million NAIF loan moving to financial close, the Cowboys will be able to draw on NAIF’s funds for construction as they require. The funds are expected to be drawn down in this financial year.

NAIF were early supporters of the North Queensland Cowboys’ Community, Training and High-Performance Centre, approving a loan to the project last year.

Due for completion in February 2021, the state-of-the-art venue will combine community areas, multi-sport high-performance training spaces, sports medicine and sports science laboratories on a parcel of land adjacent to Queensland Country Bank Stadium in Townsville.

James Cook University have agreed terms as the first tenant of the co-located space where they will host a sports science and research facility. Medical sports consulting and rehabilitation services will also be provided at the centre, while the Townsville City Council will have rights to the community field for general community purposes.

Access will be available for other clubs, including the Townsville Fire, Women’s National Basketball League (WNBL) team and touring sporting teams.

The Cowboys are expected to deliver 213 direct jobs during construction and support another 58 direct jobs once operational. Additional indirect jobs are forecast to be generated by the project.

As part of NAIF’s funding, a range of Indigenous engagement activities will be carried out by the Cowboys including a commitment to a 6.6% Indigenous participation rate in future employment and supplier opportunities.

NAIF CEO Chris Wade said: “NAIF was a key early supporter of the Cowboys’ community centre and we believe the project will bring economic and social benefits to the region, including jobs at this critical time in the regional economy. With the Queensland Government signing off on the NAIF loan, we are pleased NAIF’s funds can start to flow and the Cowboys can now move forward with greater certainty.”

NAIF has approved loans worth $2.1 billion to a range of infrastructure projects across northern Australia. Over the last 12 months, approvals stand at $1.4 billion, with the amount of money that NAIF is contractually obliged to fund now at over $850 million. That money will be drawn down as required by projects.