A new era for James Cook University students living on-campus is set to begin with the official opening of a state-of-the-art accommodation building in Townsville supported by NAIF. 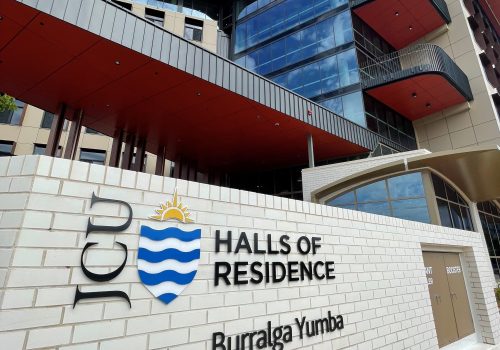 A new era for James Cook University students living on-campus is set to begin with the official opening of a state-of-the-art accommodation building in Townsville supported by NAIF.

The building will also be home to a new restaurant Canto Kitchen & Bar, offering both dine-in and takeaway options for students, staff and the broader community.

The project generated about 348 jobs during construction, with the total net public benefit to the Townsville economy estimated to be $140.2 million over the next 30 years.

JCU Vice Chancellor Professor Simon Biggs said he is thrilled for the students who now call the building home.

“We are delighted to be able to offer such a modern accommodation facility that will cater for students across Australia and the world for decades to come,” he said.

“This project could not have been achieved without the support of the Northern Australia Infrastructure Facility, which provided a $46 million loan to JCU for the project.”

JCU Deputy Vice Chancellor for Services and Resources Tricia Brand said with the addition of Burralga Yumba, there were now close to 1500 on-campus beds available for students across the Townsville and Cairns campuses.

“Burralga Yumba will meet the demands and expectations of today’s students who are seeking high quality on-campus accommodation, and contribute to the creation of a vibrant and dynamic campus,” Ms Brand said.

“I’d like to thank all stakeholders involved in this project, including contractor Hutchinson Builders who have delivered an outstanding facility.

“It’s an exciting time for students living on-campus at JCU.”

Welcoming the opening, NAIF CEO Craig Doyle said NAIF is a long-standing supporter of JCU, having provided close to $150 million to support construction of both the new student accommodation and JCU’s Technology Innovation Complex in Townsville.

“The new student accommodation will bring a range of economic and social benefits to both the university and the Townsville region more broadly,” Mr Doyle said.

“We are also particularly pleased that JCU and their construction partners embraced NAIF’s mandatory requirement to achieve strong Indigenous outcomes through employment, training and other strategies during the construction phase.

“Through our investing activities, NAIF focuses on projects that generate real and sustained population growth across Northern Australia and the new student accommodation at JCU is an example of a transformational project that will ultimately grow our economy in the decades to come.”

Derived from the Birrigubba language of the Bindal People, Burralga Yumba means Brolga Place, in recognition of the dancing burralga, or brolga.

The artwork on the building’s ground floor, titled ‘Between the moon and the stars’, was created by Brian Robinson, a man of the Kala Lagaw Ya and Wuthathi language groups of the Torres Strait, as a commemorative print to celebrate the historic naming of JCU’s Australian campuses and study centres in the University’s 50th Anniversary Year.

As part of the development of the wall murals on floors one to six, JCU engaged artist Delvene Cockatoo-Collins, a woman of Quandamooka Country, who drew upon her own country and the country which James Cook University is located on, Bindal Country.

The water, land and sky are represented by motifs of significance to Bindal Country.

The sandalwood, for instance, is used for fire-making and the barramundi is found within their waters.

Both the artist’s Country and Bindal Country are saltwater country with mud crabs and mangroves.

The wall murals on the ground floor of Burralga Yumba pay tribute to revered elements of the previous University Hall accommodation building, such as the external staircases and Juliet balconies.

Mt Stuart Street, on which the building sits, and Magnetic Island Access Road, which faces opposite, have been given the names ‘Mandilgun’ and ‘Yunbenun’ respectively.

The names relate to a story of two warriors walking south on a hot day.

The warrior Yunbenun (becoming Magnetic Island) decided to jump in the saltwater and lie on his left side looking toward the mainland.

Fellow warrior Mandilgun (becoming Mount Stuart) decided to lie in Galbidera (Ross River) but it was dry, so he lay on the bank on his right side looking toward Yunbenun.

The two warriors noticed red pebbles around them and decided to throw the pebbles toward each other but not hit each other.

The red pebbles landed in the middle of the two warriors and created Cootharinga (Castle Hill).